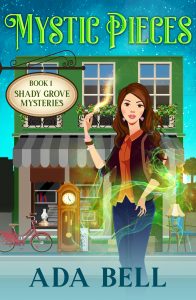 Aly doesn't believe in psychics. Too bad she just had a vision.

Aly’s got enough on her plate, with finishing her degree and taking care of her nephew and starting her new job at the antique store while crushing on the owner's son. No visions.

Alas, the universe doesn't care what Aly believes. When she turns 21, she starts feeling psychic impressions left on objects. A disorienting power when you’re surrounded by antiques all day. Then cranky customer Earl is killed, and Aly's new boss Olive is the prime suspect—not to mention the only person who understands Aly’s gifts. Who hated Earl enough to kill? Police would rather make a quick arrest than investigate, so it's up to Aly to clear Olive's name.

Shady Grove is reeling from the first murder in decades. If Aly can get her hands on the right object, she'll know what happened. Can she learn to control her visions before the killer sets their sights on her?

Audible I Apple I ChirpBooks I Google I Kobo 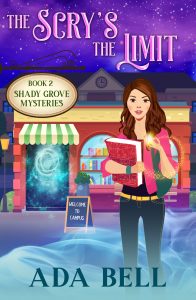 Just when Aly thinks she understands her psychic powers, a new mystery puts them to the test.

Life in Shady Grove is looking up. Aly’s excited to start classes at Maloney College, she loves her job, and her unrequited crush might be starting to turn into an actual flirtation. If only she could figure out how her sister-in-law died and help her brother move on, everything would be awesome. Then, Aly’s academic advisor and favorite professor turns up dead.

Professor Zimm was one of the school’s most beloved teachers. Who would want to kill her? The professor who could make tenure in her absence? The privileged student who hates having to retake the class? The rich girl who’s determined to get an A at all costs? And what the husband? There’s no shortage of suspects, but Aly’s running out of time to find the killer before they find her. 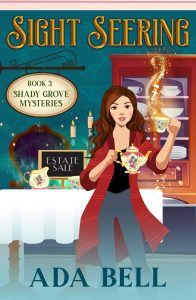 A Seer in the City…

While visiting an estate sale to pick up new items for Missing Pieces, Aly gets hit with a surprise: the elderly homeowner didn't have a heart attack--she was murdered. Aly's got the evidence in her hands, and the killer is offering to sell it to her. Time to make a deal, then call the police.

If only anyone believed her. Miriam Peabody was in her 70s and appeared to die of natural causes. Police found no evidence of foul play, but Aly knows what she saw. Worse, she’s pretty sure the killer has powers of their own. As she seeks evidence to support her vision, someone is watching Aly’s every move. They’re always one step ahead. She needs to find concrete evidence to give the police before someone Miriam trusted gets away with murder.

Amazon I Apple I Barnes & Noble I Google I Kobo I Smashwords (Kindle or ePub formats available). 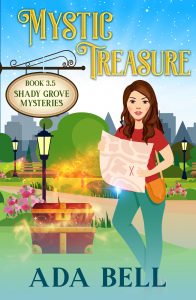 After a busy winter of murder-solving, Aly can’t wait to relax with some family fun at the Shady Grove Annual Treasure Hunt. For twenty-five years, town residents have searched futilely for a chest containing the deed to an abandoned mansion on the edge of town. At this point, Aly’s pretty sure the treasure is a myth, but she’s always up for Shady Grove shenanigans.

When the Treasure Hunt gets underway, a suspicious new resident throws everything into question. Someone’s got a hidden motive for participating, and the town may be in danger. Can Aly solve the mystery to save the day?

This novella takes place between the final chapter and the epilogue of Sight Seering. It is intended to stand alone but can further your enjoyment of the series when read in order. While Mystic Treasure initially appeared in the Murderous Mayhem and Magical Mysteries Anthology, currently the only way to get a copy is to sign up for my newsletter. 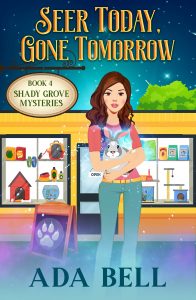 Just when Aly finally identified her sister-in-law’s killer, they got away—with a hostage.

Aly’s on the case, but leads are few and far between. Meanwhile, another mystery arises: what do you get a psychic toddler for his fourth birthday? Aly wants to make her nephew’s day, but the quest for the perfect gift skids to a halt when she finds the pet store trashed, a trail of blood,  and the owner missing.

To make matters worse, someone powerful has cursed the residents of Shady Grove. Aly’s powers vanish. Without her psychic gifts, how will Aly find Katrina’s killer and save the pet store?

Amazon I Apple I Barnes & Noble I Google Play I Kobo I Smashwords (Kindle or ePub formats available).

The Pie in the Scry 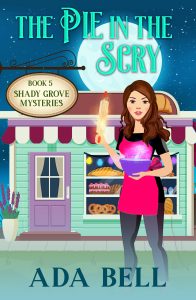 There's a killer on the loose, and they look like Aly.

Aly's used to getting visions by now, but she never expected to see herself murdering the town's beloved yet crotchety baker. She’s completely baffled because, obviously, that never happened. Then police arrive at her house with a warrant. If she didn't kill Tony, why does she have his baker's hat?

When Aly finds herself reliving the same day over and over, things go from strange to supernatural. Where did that vision come from? Aly's never seen the future before—only the past. At first she thinks the vision was a trick, sent as a distraction by the same person who killed her sister-in-law. But as she works to stop them, Aly discovers that her vision of Tony might not have been a lie so much as a premonition.

Amazon I Apple I Barnes & Noble I Kobo 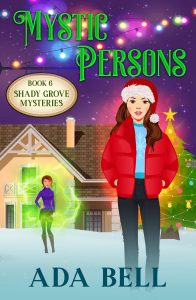 Aly’s ecstatic to be spending the holidays with her entire family this year. If only there weren’t that pesky dead guy in the bedroom.

They thought that spell went well, and by all initial accounts, it did. But Aly forgot magic comes with a price, and this one’s a doozy. Somehow, a man is dead. No one has any idea who he is or how he died. Not to mention how he got into Kevin’s primary suite. The two of them have to sort things out, preferably before Mom and Dad fly in for an extended Christmas stay. It’s difficult enough to balance school and work and family life without also trying to hide a body.

Can Aly use her powers to find out what happened before her brother gets arrested?

Preorder now from your favorite retailer!